Northern Lights and a Meteor

On July 21st, people in Asia were enjoying the longest solar eclipse of the century, and I was enjoying one of my shortest nights. I have been monitoring for solar activity for years in hopes of seeing some Northern Lights. Unfortunately for me, our sun has been very quiet for a few years. But on that night, I started seeing notifications of strong solar activity.

I’m signed up for email alerts for aural activity, check a space weather website, and have a program that lets me know the likelihood of seeing the Northern Lights. Yeah, it’s geeky, but it’s what you have to do if you want to photograph the Northern Lights. Some friends asked how I knew it was going to be happening that night and I showed them my ways of checking, much to their amusement. The strange thing is, just after they finish snickering about the geek factor, they ask me to call them next time it happens. Maybe I’ll wait until 3 AM to call.

Anyway, it was an especially good night for observing Aurora Borealis. The solar eclipse earlier in the day meant that it was a new moon, so even faint auroral activity would be visible because of the dark sky. The sky was also clear with little cloud cover forecast. The only problem for me was waiting until late at night for the sun to go down enough for the sky to get dark here in Central Alberta.

The auroral oval that night came a long way south.

As it was getting darker I kept going out to look and see if the aurora was visible in the northern sky. I probably went out four times before I happened to look straight up and see a very active aurora directly overhead. So I scrambled to get my gear out and start photographing. I even managed to pry Naomi out of bed for a few minutes to witness the event. 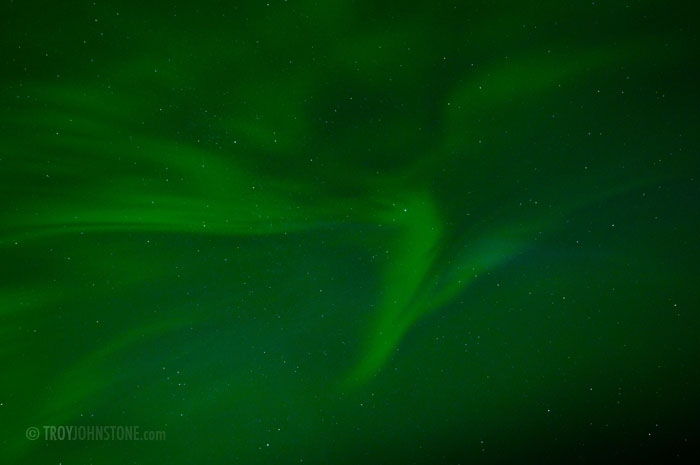 The auroral display was fantastic and some of the best I have seen in recent years, certainly the best since I seriously got into photography. Over the next few hours they slowly moved from overhead to filling the northern part of the sky, with many periods where there was just a green glow and no activity. After a few minutes the aurora would come alive with activity, with bright green and blue lights dancing around. During some of the quiet periods I turned my wide angle lens straight up to capture the Milky Way and a chance meteor. Meteor in the Milky Way

Given the weak auroras I have seen in recent years, I would have been excited about any of the photos I got that night, but I literally have hundreds. I reluctantly packed up my gear at 2:30 am and headed inside, leaving the still dancing sky to start downloading 8 GB of photos. 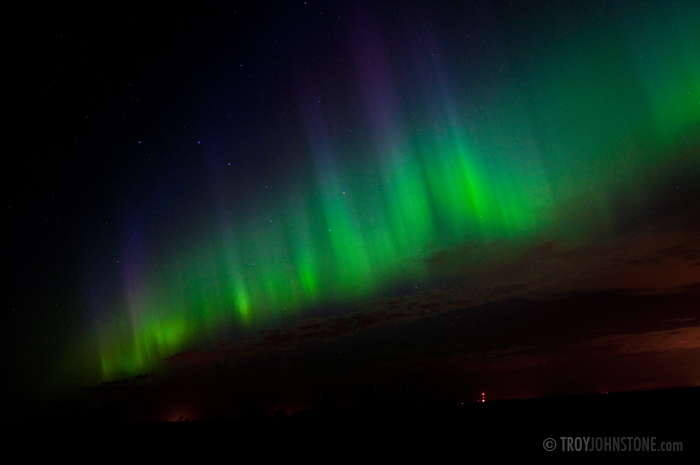 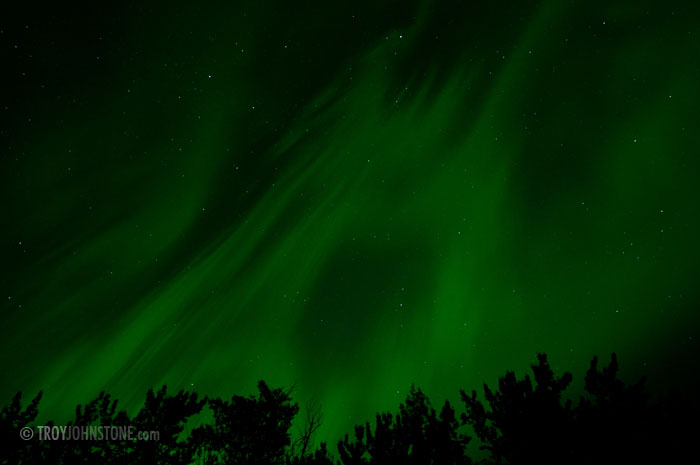 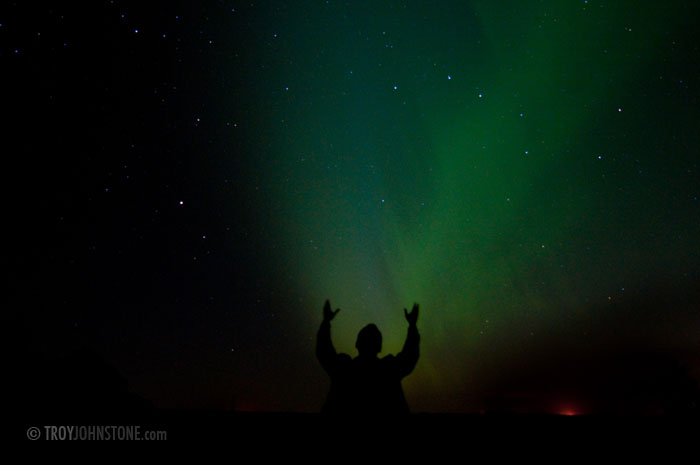 For much of the time, I had the camera set up to take continuous six-second exposures that I was able to put together as a time lapse movie.

Reminds me of a time many years ago when I was out with my telescope doing some star watching when the Northern Lights kicked into action. It would be just a glow, then occasionally some features would appear and dance around, then fade away. One of my co-workers had asked me to call if I ever saw them so I called on my bag phone (that’s how long ago it was). As we were talking I told her about how it would get active and die down again. At that moment it was quite calm and we were just chatting. Suddenly, the sky was alive with auroral activity. “Hey, here come some features,” I said, just as my old phone died. What she heard was, “Hey, here come some creatures,” then “click.” Her imagination went wild with the idea that I was out in the middle of some field being attacked by creatures and she had no way to know where I was. I thought she seemed strangely relieved when she saw me the next day at work.

See more of my photos under the night sky.